Becky sustained a brain injury in 2013 at the age of 22, after suffering a haemorrhage caused by complications from a surgery to treat hydrocephalus (fluid on the brain).

Following Becky’s brain injury, she spent six months in hospital before transferring to West Heath House for rehabilitation in April 2014. On admission, Becky was assessed by the service’s multidisciplinary team to create an approach for her therapy. She displayed challenging and socially inappropriate behaviour, meaning she was at risk of harming herself and others. She struggled to manage and regulate her emotions, experiencing anxiety and low self-esteem. Becky also relied on a wheelchair when going into the community for anything longer than a short trip.

Initially Becky required one to one support to reduce the risk of her harming herself, and with input from the support staff and the clinical team, Becky began her personalised rehabilitation, involving physiotherapy, occupational therapy and working with the clinical psychologist.

In collaboration with the staff, Becky developed meaningful goals, such as to begin attending college, allowing her to tangibly work towards independence. 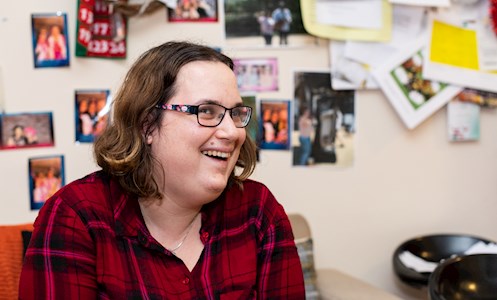 In psychology sessions, Becky used cognitive behavioural therapy and the perfect nurturer approach to help her think about what she would like life to look like in the future, but also to help make sense of how her world view came to be. She developed strategies allowing her to manage her emotions, for example relaxation techniques. With support from occupational therapy, Becky gained an understanding of the impact of her brain injury and worked on strategies to cope with her difficulties, such as attention and memory. Through occupational therapy, she also learnt strategies for managing money and has had support to attend events. In physiotherapy sessions, Becky has improved her balance, strength and fitness.

Since admission, Becky has progressed from needing one to one support to living on her own in an on-site flat, where she can cook without supervision. She can walk unaided in the community and now enjoys going out independently, as well as with friends for activities and socialising.

Becky has surpassed her goals and is now in her third year of college and will soon be moving to a nearby supported living flat.

Being at West Heath House has helped to getting me back to more like the old me. I feel I have been on a journey and look at life differently. I can see the future and that’s good. It has opened my eyes up to how people see brain injuries, some not as noticeable but still there.