The first day of February saw 2018’s Dignity Action Day. Some Brain Injury Rehabilitation Trust (BIRT) services decided to mark the day as a reminder of the importance of dignity in care 365 days a year.

The day was acknowledged at Thomas Edward Mitton House (TEM), with help from Fran, their Dignity Champion. As TEM's Dignity Champion she ensures that all service users have choices, such as the sessions they can attend, the meals that are offered and their morning routines. She also ensures that the people that use the service have as much independence and control over their care as possible, whilst also being a general listening ear to all.

TEM had a cup of tea and cake as they discussed the '10 Dignity Do’s’. They also held a quiz that tackled questions on communication, legislation and other dignity factors, which led to lively discussion and engagement from all service users and staff. One service user, who was an art teacher for over 20 years prior to their traumatic brain injury, created a big tree on the whiteboard for people at the service to write their own definition of dignity and what the word means to them personally.

At Redford Court a Digni-Tea afternoon was held. There were lots of cakes and tea to enjoy and service users explained what dignity meant to them through a rap thought up, written and performed by them. The lyrics summarise their thoughts on dignity: 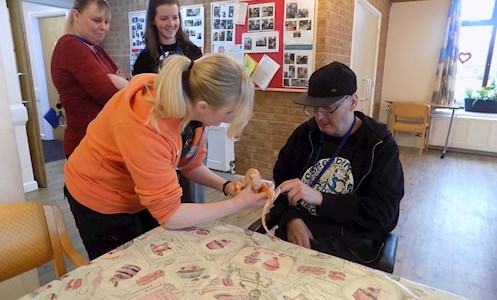 ‘All the world’s problems could be solved
With a little respect; it’s how we’ve evolved
What I give to you comes back to me.
Everybody needs a little privacy
Without dignity we learn to distrust
Rules are only suggestions, but rules are a must
With care and respect and dignity and love
We all live and we can rise above

Everyone at The Disabilities Trust is a firm believer of dignity in care and we always abide by the 10 Dignity Do’s.