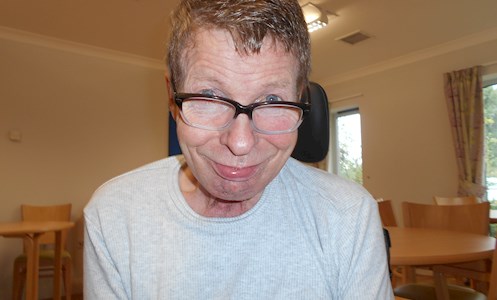 In 2012, Gareth was a Quantity Surveyor for a building company. He was a music lover, a black belt in karate and was a keen horse rider. In September of that year, Gareth and his wife Pauline were enjoying a holiday in the Canary Islands when one evening he unexpectedly suffered a cardiac arrest leading to a hypoxic brain injury, when the brain doesn’t get enough oxygen.

Gareth was in a coma for five weeks and woke up with a lack of understanding of what had happened to him, or what was happening presently. He lacked control of his movements and was consistently frightened.

He was eventually transferred back to the UK and spent time in a handful of hospitals over the next three years. Pauline described this time as turbulent, with his progress wavering and worsening at times. Pauline then heard about theBrain Injury Rehabilitation Trust’s Welsh centre,Tŷ Aberdafen, near Llanelli.

Pauline said “I was visiting my son in Australia when I got the call from Tŷ Aberdafen. I cried with joy; we’d visited the service before I went on my trip, and it was so different to the hospitals he’d been staying in. It was new at the time and there was a feeling of normalcy I hadn’t experienced in a while. I was hopeful for what Tŷ Aberdafen might mean for our family.”

Gareth moved into Tŷ Aberdafen in February 2015 at which time he was having seizures, was fatigued and was wheelchair dependent. After arriving at the service, the team began an assessment process with Gareth in which he tried physiotherapy, occupational therapy and speech therapy. Through the mix of therapies, and through monitoring by support workers, Gareth is now able to cope better with the problems he experiences.

Tŷ Aberdafen staff have also supported Gareth to have weekly visits home, which have been beneficial in giving him a sense of routine and connection to his life before his brain injury. He has got involved with the weekly music therapy sessions at the service, which, as a fan of music before his brain injury, he has responded well to. His support workers have also assisted him in attending a disability karate group – another one of his passions.

Now Gareth is living at Tŷ Aberdafen, Pauline feels supported too. She said “The staff are happy to answer any questions I have, and always take the time to sit and talk me through them. I feel so much happier knowing Gareth is being supported in the right way.”