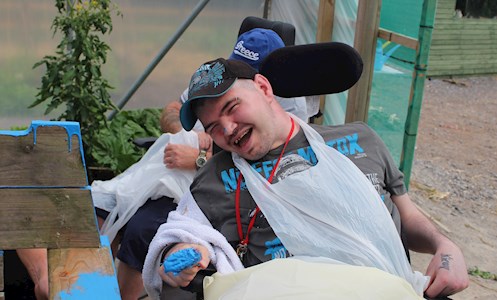 When he was in his twenties, Matthew sustained a brain injury in a motorbike accident that caused multiple physical injuries, problems with speech and language, cognitive impairment and some behavioural issues. Matthew was admitted to Tŷ Aberdafen a few years after his accident and began a multi-discipline rehabilitation programme. Over the last year this has included music therapy provided by Nordoff Robbins music therapist Lucie. Here, she shares the impact she has seen the therapy have on Matthew.

Matthew has been having music therapy for just over a year now, as part of his ongoing rehabilitation at Tŷ Aberdafen. Matthew uses a wheelchair and requires support for everyday tasks, and communicates mostly through using gestures and electronic devices. He is always excited to attend his sessions and some days music is the only thing that motivates him.

When I first started working with Matthew, he could hold a drumstick and beat the drum with his dominant hand but found it difficult to keep going for more than a few beats at a time. I would improvise on the piano, listening closely to Matthew’s quirky beat and using it as a guide, sometimes matching his playing exactly and other times offering music to connect Matthew’s phrases. I continued to work with Matthew in this way, encouraging him to push himself to beat for longer, through improvising music that he wanted to be part of and that motivated and stimulated him.

Over the past year I have seen improvements in Matthew’s concentration and focus, and in his listening and physical control of the beater. As a result, Matthew’s phrases have now become more sustained, providing a stable foundation for the music we create together. Now, having developed more control in his beating, Matthew can communicate his playfulness and sense of humour more clearly, giving him a heightened experience of leading – and of catching me out!

I have now started encouraging Matthew to use his voice more, as this is something he doesn’t tend to do outside of sessions. In a recent session, we finished with a familiar pop song and, unprompted, Matthew joined in with the chorus! His singing was in the key of the music I was playing, and I noticed him trying to form the shapes of words with his mouth.

Since then, I have been sure to give Matthew the time and space he needs to work on his vocalisations. Gradually, his vocal production is becoming more immediate and the length he can hold notes for is increasing. Matthew seems especially animated after working on his voice and is clearly aware of what he is doing and what a great achievement this is.

Music therapy has been a valuable part of Matthew’s rehabilitation this past year, supporting his social, physical, cognitive and communication goals. Our musical work encourages him to be more present and aware of himself and those around him, offering a different way of expressing his personality and helping him to explore different avenues of communication. Matthew’s sessions also offer him an experience of empowerment through being in control and leading, which feels highly significant in the context of his life.