Following a motorcycle accident, Chris sustained a traumatic brain injury which changed his life completely. Chris' brain injury caused him to become physically aggressive to the extent that he was transferred from a dedicated rehabilitation centre to York House which specialises in managing very challenging behaviour after brain injury. Following effective rehabilitation with the team, Chris now runs a tuck shop in the service - with a smile - and is working towards a visit back home.

Chris' physical and verbal aggression acted as a substantial barrier to his rehabilitation. Significant cognitive deficits, which affected Chris' thinking, planning, memory and concentration skills, and severe physical impairments left him dependant on others for all aspects of his daily living. Chris needed to use a hoist for all his transfers in and out of bed / bathroom and he was also very anxious and reluctant to go out into the community

Gradually, Chris was able to trust the staff at York House. In doing so, he progressed enormously and made significant improvements in his behaviour and ability to carry out daily living skills. In the kitchen Chris can now prepare a hot drink and the occasional snack. As part of his rehabilitation programme, Chris also receives therapy from his psychologist on accepting and adjusting to living with a brain injury which gives him insight into managing his behaviour.

The physiotherapy team supported Chris to build up his strength and tolerance through doing bed exercises and then used a 'banana' board for transfers. As Chris became more confident and stronger he progressed to being able to transfer standing up and has now eliminated the use of a hoist. He works out in the on-site gym and can now walk the length of the parallel bars and he has started using a walking frame in therapy sessions. Chris has progressed so much that he is now planning to join a gym in York. The team also used a graded approach to gradually introduce Chris to York House's vehicles to enable him to venture into the local community.

This approach was very successful: Chris now regularly uses York House's minibus and car to access local facilities, and with a manual wheelchair and electric wheelchair he chooses which transport option best suits his needs. His next step is to have an overnight stay near his family. As part of the vocational pathway, Chris provides a tuck shop for other service users and staff. "Taaffe's Tuck Shop" is going well with Chris responsible for handling money and keeping stock of items - along with service with a smile. 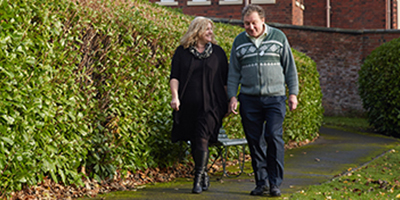 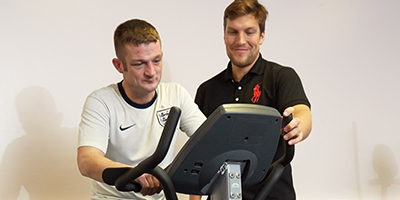