On 6th February, we launched the results of our report, Making the Link: Female Offending and Brain Injury, the first study of its kind into brain injury in female offenders.

The study, funded by the Barrow Cadbury Trust and The Pilgrim Trust, was carried out from 2016 to 2018, with an accompanying independent evaluation by Royal Holloway, University of London. The findings highlight the need for a support pathway to help manage the health, cognitive and behavioural issues associated with brain injury, which may impact on likelihood of re-offending.

It is widely acknowledged that TBI is over-represented in prison populations, with the likelihood of increased risk of violence, earlier age of first incarceration, a greater number of convictions, re-conviction, mental health problems and a greater number of attempts at suicide.

The needs of women in prison with TBI are likely to be complex, and the lack of understanding and identification of a brain injury may result in a higher risk of custody and re-offending. Therefore, the study introduced a Brain Injury Linkworker Service in HMP/YOI Drake Hall to provide specialist support to women with a history of acquired and traumatic brain injury.

The Brain Injury Linkworker aimed to develop a sustainable pathway of support for rehabilitation and help prisoners to manage the transition between custody and the community.

From the women supported through the service, there were 196 reports of severe blows to the head and distressingly, 62% of 100 women reported they had sustained their brain injury through domestic violence.

Nearly half (47%) of the women had been in an adult prison five or more times and 33% sustained their first injury prior to their first offence.

The trauma in the lives of the women with TBI is evident in the accounts provided by interview participants. Some of the accounts and case studies presented in the independent evaluation written by Royal Holloway, University London are distressing to read.

The independent evaluation also showed a female Linkworker was sensitive to the gender-specific needs of those being supported. The women who were seen by the Linkworker experienced improved mood and self-esteem, and enhanced confidence and positivity; key factors that have been previously identified as being essential for a woman to engage in rehabilitative programmes.

As a result of these findings The Disabilities Trust calls for:

Georgina Nayler, Director of The Pilgrim Trust said: “The Pilgrim Trust was pleased to part fund this project and we have been struck by the positive impact the Brain Injury Linkworker has had on the women supported within the prison. Such screening and support should be available to all women in the criminal justice system. This report demonstrates that such understanding and support would improve the women’s mental and physical health and assist them to lead fulfilling lives outside prison.”

Irene Sobowale, Chief Executive of The Disabilities Trust said: “The Disabilities Trust is delighted to launch this research, which builds on over five years of research into male offenders and brain injury. For the first time in the UK, we have considered the specific needs and experiences of female offenders, who are some of the most vulnerable in the criminal justice system.

The personalised service which we have developed, supports women dealing with the impact of their brain injuries, and independent evaluation from the Royal Holloway University London agrees that our Linkworker service within HMP & YOI Drake Hall recognised the gender specific needs of women.

There is much more work to be done to ensure that women with a brain injury are provided with effective support to ensure that they can engage in rehabilitation programmes and reduce the likelihood of reoffending. The Disabilities Trust looks forward to working with partners and Government to achieve this.” 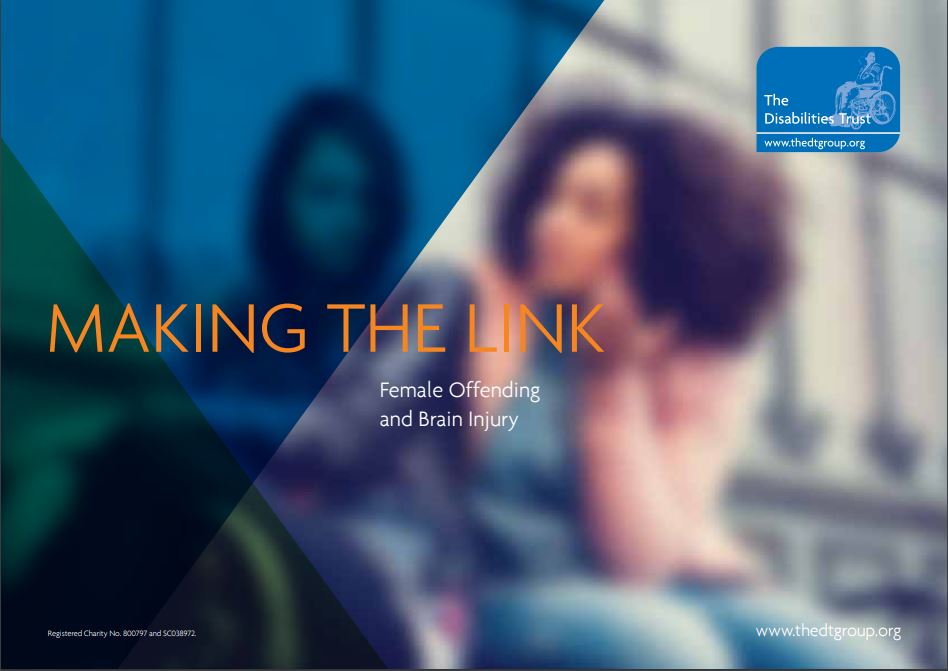