The Disabilities Trust is today publishing a discussion paper to shine a light on the hidden impact of brain injury for survivors of domestic abuse.

‘Brain injury and Domestic Abuse: An Invisible Impact’ aims to ensure that there is a rethink about the support provided to women who have experienced domestic abuse – and that significant consideration is given to the substantial impact of traumatic brain injury (TBI) commonly sustained through blows to the head or strangulation.

The paper is the result of a roundtable discussion the Trust held at the end of last year, which brought together experts including academics, representatives from leading domestic abuse charities and the NHS, in a ground-breaking discussion to explore the issues of domestic abuse through the lens of brain injury. The debate was held in a bid to discuss how women could be better supported through improved research, policy and practice in our communities. 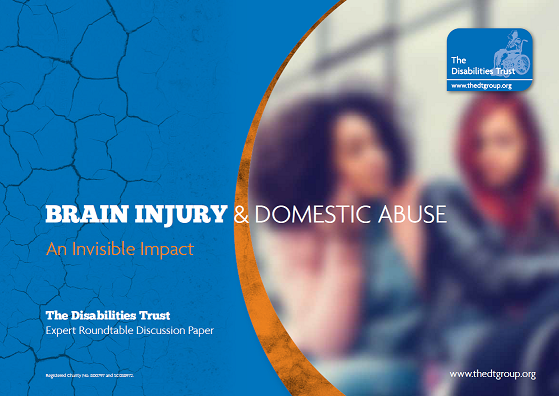 The roundtable, held in November 2019, followed the publishing of The Trust’s earlier findings of the link between traumatic brain injury (TBI), domestic abuse and female offending, detailed in its report, ‘Making The Link: Brain Injury and Female Offending’.

After a two-year study at HMP/YOI Drake Hall, in the first study of its kind in the UK, The Disabilities Trust found nearly two-thirds (64%) of women reported having experienced a brain injury. The leading cause of brain injury reported by women was domestic abuse (62%).

From these findings, an additional analysis examined the link between brain injury and domestic abuse, to develop an understanding of the specific needs of these women. Key findings included:

- 72% reported violence as the cause of their brain injury

- 61% of those with a brain injury caused by domestic violence reported having self-harmed, compared to women who reported other causes of brain injury (29%)

The distressing findings illustrate the complex experience and vulnerability of women who have experienced the trauma of both brain injury and domestic abuse. Alongside other frequently reported factors, such as substance misuse and unstable housing, the need to support women holistically, not just within the Criminal Justice System, is fundamental to improving these women’s lives.

Additionally, in its 2019 published annual report, the All-Party Parliamentary Group on Domestic Violence and Abuse, recommended that all frontline healthcare staff are trained in understanding violence against women and girls. They also recommended advanced training for professionals who are in frequent contact with survivors, and that domestic abuse and sexual violence are secured as a strategic priority across the health and social care sector.

At a time when some domestic violence charities have reported a 10-fold increase in visits to their website, The Trust hopes that the findings will open a discussion with Government, and the wider sector, to support the needs of women who have experiences both brain injury and domestic abuse.

Irene Sobowale, CEO of The Disabilities Trust said: “The briefing we are publishing today further evidences the distressing and traumatic lives of women who have experienced both domestic abuse and brain injury and their increased vulnerability. By publishing this discussion paper from the expert roundtable, we hope to explore ways in which we can work together to better support these women and encourage change at the highest level.”