“Just to let you know that words are not adequate to show the gratitude we feel for the enormous, compassionate, persevering, loving contribution you all made to Jennifer’s* recovery”

So starts the letter from Jennifer’s parents to the team at Graham Anderson House who supported their daughter through rehabilitation following a brain injury.

Jennifer came to the centre following a cardiac arrest and sustained a hypoxic brain injury as a result. As a result, she was unable to dress herself, read or write, or differentiate between numbers and letters. Jennifer loved to cook but could no longer read a recipe or follow the method. Her confidence was very low. However, by the time she left, after four months and a few months as an outpatient, she was so much more independent; dressing herself and doing her own makeup. Jennifer’s confidence has increased markedly and she is now back to driving independently, using her phone and writing songs.

Jennifer’s tremendous progress was summed up in her parent’s words. “We think she ‘graduated with honours’… thanks to all of you.”

Sandra Wylie, Manager at Graham Anderson House, was delighted that Jennifer’s parents had been so satisfied: “To be told by Jennifer’s parents that they knew that their loved one was ‘in the right place’ being with us is so rewarding and being thanked for ‘the unceasing support given to us during a very difficult time’ really makes me very proud of the team."

*name has been changed. (the photo is representative of the daily life at Graham Anderson House and does not feature Jennifer) 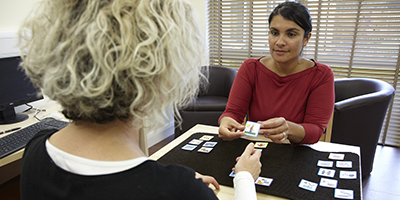