Every December, thewealthworks select a charity to support as an alternative to sending traditional Christmas cards. This year they decided that the ConnectAbility appeal would be a fantastic fit for their company.

Having nearly reached their target of £250,000 thanks to generous community support, the appeal has already transformed many lives by funding assistive communications equipment, such as eye trackers and e-readers, to increase the independence of the people supported by The Disabilities Trust.

Donations such as this one from thewealthworks will help the next stage of the appeal which will see ConnectAbility Hubs opening to give disabled people in the community a chance to try assistive technology free of charge. The first ConnectAbility Hub was opened on 4th October this year at Shinewater Court – a residential purpose-built centre, providing accommodation and support for adults with complex physical disabilities. It forms part of the nationwide network of support services provided by The Disabilities Trust. 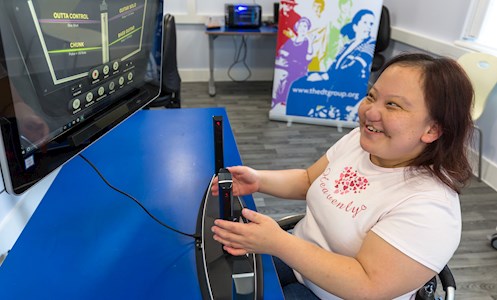 “We are very thankful to thewealthworks for their generous donation. Having opened the first hub in Eastbourne we are very keen to get these set up and running across the country and a donation such as this enables us to make that happen. Assistive communication technology can transform the lives of people with disabilities and help them gain greater independence”.

Hannah, one of the service users at Shinewater Court said: “The ConnectAbility Hub is an essential part of our lives as it enables us to learn and use technology efficiently."

Next year marks 30 years since the foundation was laid at Shinewater Court, which was formally opened by the late Princess Diana in 1989. Service users receive specialist services for conditions such as cerebral palsy, muscular dystrophy, spina bifida, arthritis, stroke, multiple sclerosis and disabilities resulting from accidents.

Next year marks 30 years since the foundation was laid at Shinewater Court, which was formally opened by the late Princess Diana in 1989. Service users receive specialist services for conditions such as cerebral palsy, muscular dystrophy, spina bifida, arthritis, stroke, multiple sclerosis and disabilities resulting from accidents.

Christopher, one of the people we support, came to Shinewater Court in October 2016, needing support in every area of his life – due to becoming highly obese after a distressing time in his life. In just one year, he lost 10 stone and is now much more independent and gets out and about in the local community.

“Christopher likes to attend various events on behalf of Shinewater Court, such as the Remembrance Sunday parade. He puts his weight loss down to all the support he has been given by the staff to help him cut out junk food. He was unable to walk on arrival to the service and he can now walk with the aid of a walking frame and do things for himself. Christopher says he has another four stone to get to his target weight.”

On Friday 22 December, staff and service users from Shinewater Court will be at Tesco in the Langney Shopping Centre in Eastbourne talking about the ConnectAbility Hub.

If you or your company would like to donate towards ConnectAbility or another appeal for The Disabilities Trust, please contact Hayley by emailing Hayley.Wicker-Bradbury@thedtgroup.org or calling 01444 237286.