The long-term development of Victoria House’s sensory garden and grounds are now complete, thanks to Tesco. The project named ‘Green Fingers’ based in Victoria Dock was awarded £12,000 last year through the supermarket’s Bags of Help initiative. The Bags of Help initiative was rolled out in Tesco stores across the country last year, with the supermarket’s customers able to vote in store to decide which community group or project should receive a share of a funding pot. Staff from Victoria House worked extremely hard to promote the project, including Activities Co-Ordinator, Angela Hardie.

The Victoria House ‘Green Fingers Project’ has used the vital funding to build a new greenhouse, which is fully adapted for less able bodied residents so they can engage in gardening projects and increase their physical activity and well-being. Accessible flower beds have been planted and two benches have been placed in the garden to increase the use of the already fabulous outdoor space at Victoria House, so residents can enjoy the tranquility that it will bring. The greenhouse was built by New Century Glasshouses of Bridlington.

The purpose-built centre also worked closely with local designer, Chris Campbell to create a beautiful water fountain feature for the sensory garden, creating a serene atmosphere and beautiful feature for residents to enjoy. Men in Sheds built the bespoke benches around the fountain a member of their team gave up his own time to adapt the bedding in the greenhouse. Angela Hardie, Activities Co-Ordinator at Victoria House, said:

We’re excited to fully unveil our sensory garden for our community and residents with high dependency needs to really enjoy. The Bags of Help scheme is such a great way for local projects to get a much-needed funding boost, and I’d like to thank everyone again who voted for Victoria House! 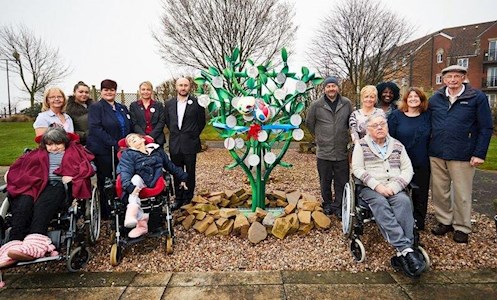 Tesco’s Bags of Help project has already delivered more than £33 million to thousands of projects up and down the UK. Nick Carolan, Hull St Stephen’s Extra Store Manager, said: “It’s wonderful to see the makeover and now completion of this project, showing first-hand how a Bags of Help grant can help transform the communities we serve. There’s been great enthusiasm for the initiative among Tesco colleagues and customers and I encourage groups across Humberside to apply.

"It’s been fantastic to see so many local projects benefit from Bags of Help funding and we are hugely excited for the future as the scheme continues to grow and help even more communities across the UK.”

Since opening in 1992 as part of the network of services provided by The Disabilities Trust, Victoria House has provided accommodation and support for people with complex physical disabilities, such as: cerebral palsy, muscular dystrophy, spina bifida, arthritis, multiple sclerosis and disabilities resulting from accidents or a stroke.