Paul is connected and in control thanks to assistive technology 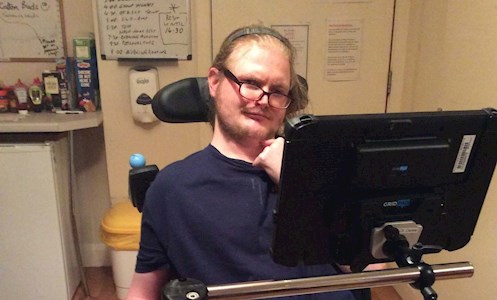 A self-confessed metalhead and lover of fast cars, Paul, 31, wants to be connected to the world. He wants the access to information and entertainment that many take for granted.

After suffering an acquired brain injury from a fall, he has impaired speech and very limited use of his limbs. Until recently, activities like browsing the internet, watching TV and even switching a light on have not been possible without support.

Paul lives at the Brain Injury Rehabilitation Trust's service in Liverpool, Redford Court, where he uses two seperate pieces of assistive technology. An environmental control, powered by a knee switch, enables Paul to watch TV on his own, play DVDs and record programmes. He can also change the room temperature and lighting using the switch.

He also uses a communication aid, the Grid Pad Three. Paul explains that he wanted "more opportunities and ways to communicate with family and friends". Ace Centre, the charity which provided the technology, carried out a bespoke assessment to establish Paul's needs with help from his occupational therapist and speech and language therapist.

Paul was involved in the whole process, he says, adding: "I was included in all trials of equipment and my opinion was valued."

With a bespoke stylus and thumb switch he uses social media, browsing content and chatting to friends and family. He can access information on the internet, without relying on somebody else to support him.

The technology also has a speech aid which Paul rarely uses because he is determined to continue improving his speech. He hopes communication technology will improve further so that he can do more.

It could be "more like a mobile phone", he says, with the ability to send text messages. He adds: "I would like it to be compatible with more apps, so I can do gaming and use WhatsApp." Overall though, he is "delighted" with his assistive technology.

Paul's occupational therapist, Stuart, believes that his life has improved since using this technology. He explains: "Paul is a funny and lively guy, his personality shines through and it's important that he can express himself and connect with the outside world. He can now send an email to his mum and dad, or research the line-up for a festival, whenever he wants.

"He can control his environment without staff coming in and out to change the TV channel or switch his light off. He is so motivated to do more and the technology he uses is giving him the freedom to do it."