In 2019, Lewis* fell off his bicycle and hit his head which left him with a brain injury. He had an existing diagnosis of schizophrenia. After a stay in two hospitals, Lewis was transferred to our services for rehabilitation, before moving onto supported living accommodation. We share his story as part of our #ThroughOurEyes campaign shining a spotlight on the benefits of neurorehabilitation.

When he first arrived at our rehabilitation centre, Lewis couldn’t work out how to use the camera on his new phone or open a tin of food. This was because his ability to plan, problem solve and reason had been affected by his brain injury.
Coordination was difficult but Lewis could still move around independently. His speech was slightly slurred and he was only sleeping for around two hours a night. 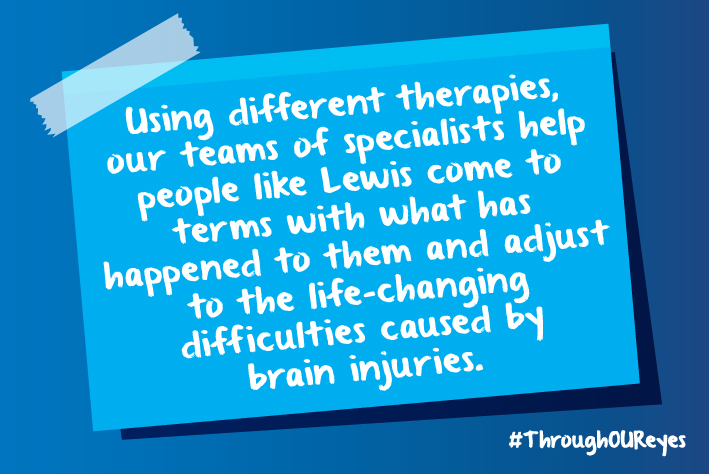 The first task was to find out what was causing Lewis’ lack of sleep and develop a programme to help him. This involved monitoring how much he drank, having less caffeinated drinks, and doing more activities to discourage daytime sleeps.

Our staff supported Lewis to attend mindfulness and relaxation groups with other people with brain injuries and helped him with his problem solving and communication skills.
He also had regular gym sessions with physiotherapists.

Lewis wanted to relearn how to prepare basic meals for himself. He selected a lunch dish he wanted to prepare and staff supported him to learn how to do this. His progress was assessed using a coding system that recorded the types of “mistakes” he made and kept count of them.

The training sessions were filmed so our staff could monitor how much support Lewis was given and the type of assistance he needed. Lewis was then reassessed at the end of the training programme to see what progress he had made.

Talking about this, Lewis said “it was good. I really enjoyed it. Working on it regularly was really helpful.”

At the end of the basic meals training, Lewis could make lunch by himself. The total amount of time he needed to make lunch reduced from over 90 minutes to around 20. He can now prepare simple meals independently, which was one of his rehabilitation goals.

After several weeks, Lewis was sleeping around seven hours a night which he has maintained.

He has been discharged to supported living accommodation for people with brain injuries and now needs less care.

*This is a fictitious name to protect the person's identity. This anonymised case study is included with the person's consent.